I wrote yesterday about exposing myself by sharing my postpartum depression story as part of The Blank Monologues (TBM) at Millikin University. But there’s a part two to that story. Not only did I expose my own truth, but I also exposed myself to new perspectives, experiences, and understandings that were shared as part of the show.

I had never attended The Vagina Monologues (TVM) before — that’s the show that TBM was adapted from. If you haven’t either, let me tell you that this is not a she-woman, man-haters occasion. The Blank Monologues (and I assume TVM,) was a platform for sharing some of what it is like to be a woman today and sharing hopes for what that experience will be like in the future.

Being a member of the TBM cast was a powerful experience for me. Not only did I get to watch my daughter practice her craft (proud mama here!), but I also took a closer look at a topic (femininity) that I usually just gloss over without thinking too much about it.

I hadn’t read the entire script all the way through before I got to Decatur for dress rehearsal, but I’d heard a few of the monologues during the rehearsal that I’d attended via FaceTime, so I knew that I was going to have to steel myself for some language that I’m not used to — or entirely comfortable with — hearing.

You know what happened? I was so struck by the authenticity and the power the women in the cast projected that I didn’t even think about being uncomfortable. The opening monologue was original to this performance and was delivered by the young women in the cast (that is, everyone except me and the three professors who were also in the show). It was called “My Feminism” and was a sort of feminist manifesto. And it made me re-think feminism.

I should probably point out here that I don’t usually get too riled up about gender equality and pink hats and marching on capitols. I like to be agreeable (at least on the surface) and choose not to rock the boat. I am not comfortable with anger, but this devised manifesto helped me to better understand what people are angry about.

The show included music performed by a transgender woman. It was not my first encounter with a trans woman — you might remember Emma, but it’s not something that happens every day. Mel, the musician, talked briefly about her experience living as a woman in a world that doesn’t always acknowledge that and I was most struck by her humanity. She is just a person who wants to be accepted. Aren’t we all?

Another group monologue was called “Why I Didn’t Report.” Some of the “whys” were statements that have been given by others over time and several of them were these brave young women’s stories — stories that made me sad, and shocked, and has me re-thinking what constitutes assault.

“These Are My Sisters” spoke of all the women in the world and how much we are connected, how much we owe to each other. My favorite from that monologue was “The teachers that pushed us to the top, and not over the edge, are my sisters.” WOW.

I looked around the room, especially at these amazing young women who believed in this project so much that they gave up dozens of hours over two months to bring these stories to light. I looked at these Millennials, who I have at times judged as loud, hysterical, and inexperienced, and though I might not agree with everything they believe in, I thought to myself, “This generation is going to change the world.” 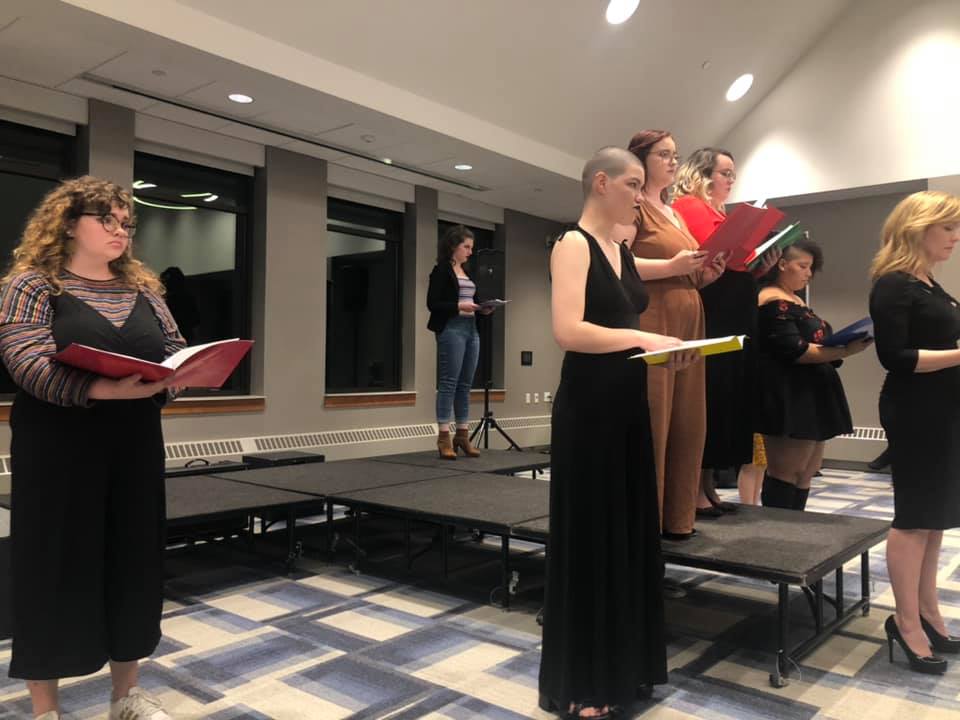